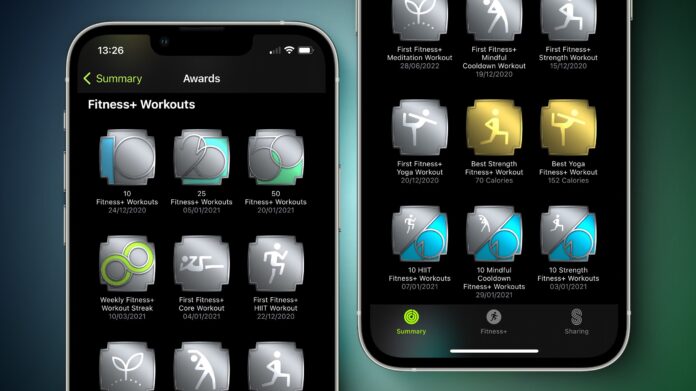 As of the third developer beta of iOS 16, specific prizes for Apple Fitness+ routines are now available.

Activity awards are obtained in iOS 15 by successfully completing predetermined tasks, such as breaking a Move ring record, maintaining a perfect fitness schedule, or achieving 100 Move targets. The awards can be earned with or without participating in Fitness+ activities, but with iOS 16, Apple is providing customers with a new opportunity to recognize their Fitness+ accomplishments.

The new rewards, which were included in the third developer beta of iOS 16, are distinguishable by their distinctive shapes and are related to particular Fitness+ activities and categories.

The awards are available retroactively for completed Fitness+ exercises that have met an award’s requirements; however, users could not view the new awards until they have finished their subsequent Fitness+ session before they appear on their devices.

Beyond the addition of new activity awards, iOS 16 makes the Fitness app available to all iPhone users, even those who don’t own an Apple Watch. This enables them to establish daily Move goals and see how their active calories contribute to the closure of their Move rings.

Premier League: 10 things to watch out for this weekend | Premier League
Deadly Flames Threaten Wildlife Site But One Man Used Hose To Keep Animals Safe
Michael Jackson VS Elvis Presley. Epic Rap Battles of History Season 2
How To Fix Your Fatigue Do This Every Day
10 Early Warning Signs of Breast Cancer You Should Never Ignore
Inside Air Force One: Secrets to Presidential Travel